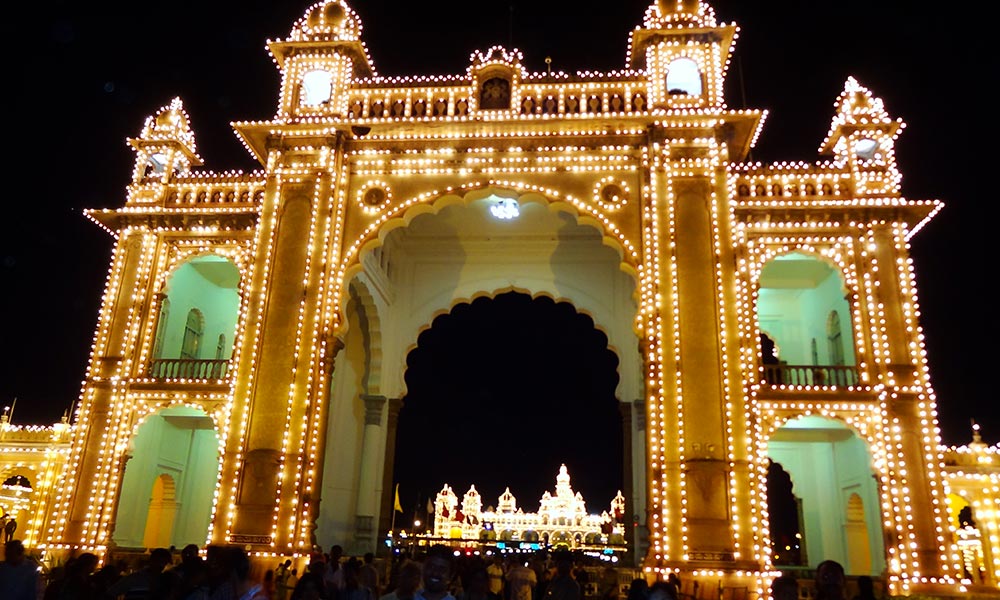 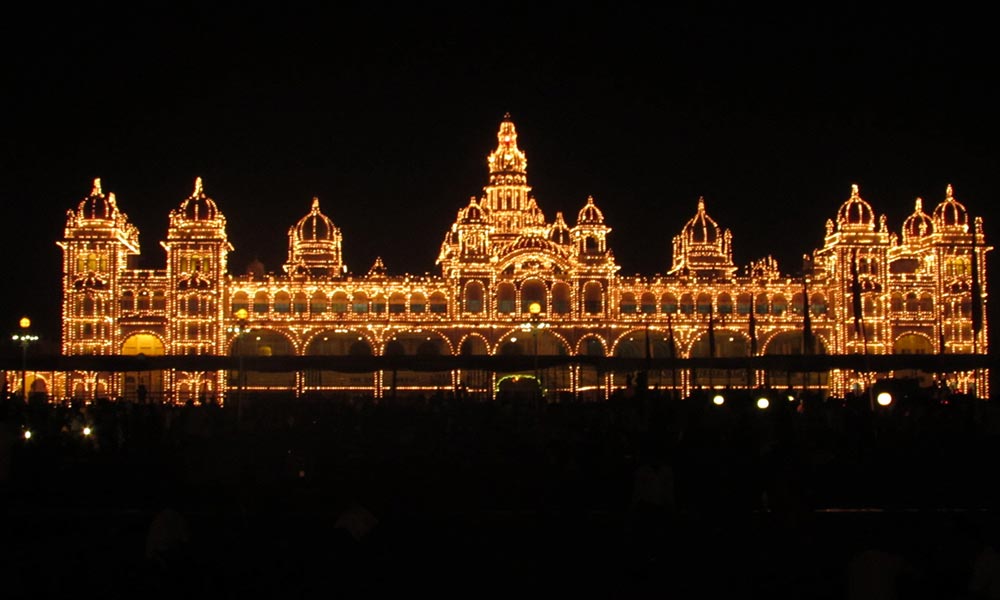 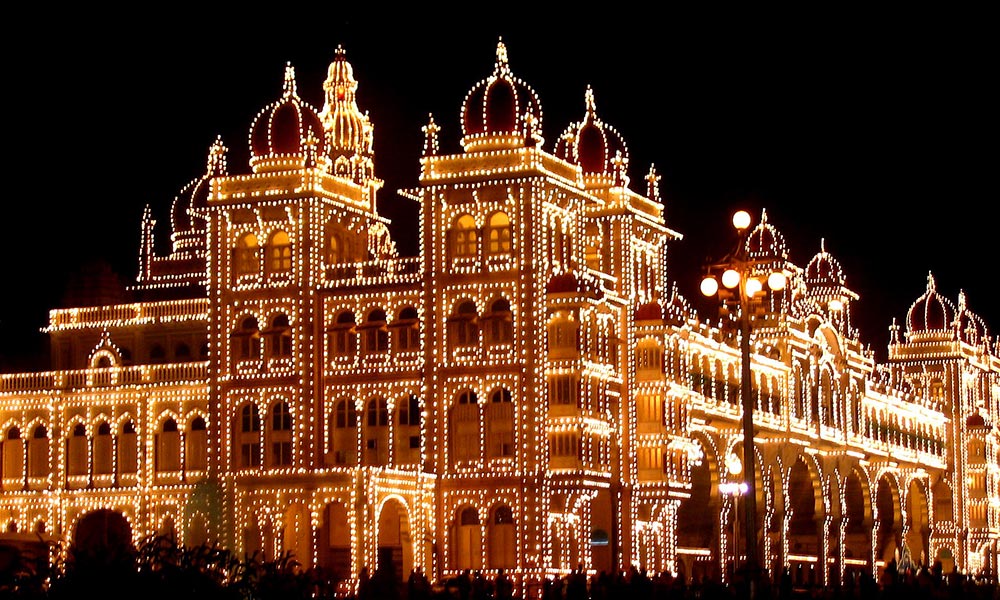 Mysore Dasara is the state festival of Karnataka and is celebrated on a grand scale from Oct 1 till 11th.

Main Attraction  of highlight is the traditional procession on the last day of the festival.

Mysore Dasara is the state festival of Karnataka and is celebrated on a grand scale. It is celebrated in the month of September or October. The festival is celebrated for ten days with the last day being 'Vijayadashami', which is the most auspicious day of the festival. As per legend, the last day symbolizes victory of good over evil, as it was the day when Goddess Chamundeshwari killed the demon Mahishasura. The Mysore city has a very old tradition of celebrating the Dasara festival; recently in 2010 it completed its 400th anniversary.

The Mysore Dasara celebrations were first started in 15th Century by the Vijayanagar Kings. After their Kingdom fell, the Wodeyar's of Mysore, Raja Wodeyar I continued the Dasara in the year 1610. During the Mysore Dasara, various events take place at various locations like auditoriums, Mysore Palace, exhibition grounds, etc. These events attract a large number of audience both Indian and foreigners.

Celebration
The Mysore Dasara celebrations carry on for full ten days. Each night the Mysore Palace remains spectacularly illuminated during the Dasara. The celebrations begin with the royal couple offering a special Puja to Goddess Chamundeshwari in the Chamundi Temple which is situated atop Chamundi Hill in Mysore. After this a special private durbar i.e. royal assembly is held at the Mysore palace.

During the festival several dance performances and music concerts are held in auditoriums and other venues. Wrestling competitions and food festivals are also organized. The Dasara exhibition starts during the festival and lasts till December. Various stalls sell all kinds of handicrafts, ornaments, clothing, cosmetics, eatables, etc along with games and amusement rides at the exhibition.

Mysuru district has a rich history with many pre-historic sites, monuments, forts, temples, mosques and churches depicting the archaeological, architectural and heritage value of the region. The district possesses excellent fauna and flora, rivers, hillocks, lakes and a moderate climate.

Mysuru city is the headquarters of Mysuru district which forms one of the southern most district of Karnataka State. Mysuru is the name by which Karnataka State was known prior to 1973. The city is in the south-western direction from Bangalore at a distance of 139 Km and is well connected by rail and road. It covers an area of 128.42 Sq. Km, having City Municipal Corporation since 1977. The population of the city is 8,87,446 consisting of 4,43,813 males and 4,43,633 of females as per provisional reports of Census India – 2011.

The city with the majestic Mysuru Palace, the royal mansions, public buildings, gardens, water bodies and planned markets exhibit an indelible impression of the vision of the Maharajas, their Dewans and other talented luminaries of the City Municipality, as early as 1862. The total harmony of buildings, sites, lakes, parks, open spaces of Mysuru and the back drop of Chamundi hill adds to city’s attraction.

The antiquity of Mysuru dates back to the days of the Mahabharata. Tradition identifies the place as the abode of Mahishasura whom Chamundesvari killed and the name Mysuru is associated with it. Mahavamsa and Deepavamsa, the two Budhist texts, allude to the despatch of Budhist missionary Mahadeva by the Mauryan emperor Asoka to Mahishamandala to propogate Budhist Dharma. Inscriptions speak of Mahishapura, Mahisurapura and Mahishasurapura. Erumainad of Tamil classics is also identified as Mysuru and an inscription dated 862 A.D. from Kadalur in Mandya taluk refers to the place as Maysooru. In the 10th century, the city was called Mysuru Nadu of 70 villages. After 1499, this town was clearly mentioned as Mysuru.

The city is also known, throughout the world, for the pomp and gaiety with which the traditional Dasara Festival is held here annually during the Navaratri. The tourists would throng the city from all over the country and abroad in great numbers to witness the Jamboo Savari(Elephants’ procession), the chief attraction on the occasion in which decorated elephants walk the procession route, majestically. The Maharaja used to sit in the howdah earlier. The tradition was maintained in full vigour for more than a decade even after the country acquired independence. Now, under the changed political and administrative conditions, Dasara is being organized in the city in a modified form as Naada Habba, festival of the land. On the tenth day of the festival, the grand procession of Goddess Chamudenshwari accompanied by umpteen tableaux is the chief attraction.

The Mysuru city and its surroundings have a large number of industrial units. The city is an educational centre and in addition to many colleges and the Mysuru University, it has Engineering, Medical, Dental, Pharmacy Colleges, Speech and Hearing and the Central Institute of Indian Languages. The city has the oldest Chamarajendra Zoological Gardens and many parks and gardens. Mandakalli Airport is located at Mandakalli village at about 8 Kms from Mysuru. There are a few lakes in the city of which Lingambudi, Kukkarahalli and Karanji are very popular.